The passion for earthy R&B seemed to have dimmed as the 80s began. Synthesised confections abounded and veteran Bobby Womack, the Midnight Mover, was at a crossroads. His peers were either in the wilderness (Marvin Gaye, James Brown and Isaac Hayes) or otherwise indisposed (Sam Cooke, Jackie Wilson, Sly Stone), so it was left to Womack to fly the flag for down-to-earth, quality soul.

Womack had been a recording artist for best part of two decades when he made The Poet. After making his name with The Valentinos in the 60s, he cut a string of heartfelt, emotional albums for Minit, United Artists and Columbia throughout the 70s. The Poet was written with great optimism; Womack was out of contract and was approached by agent Otis Smith to set up on his new label, Beverly Glen.

Working with Patrick Moten, Womack crafted eight songs that sounded breathlessly contemporary. If this material had been put in the hands of a soul crooner, it could have sounded perfunctory. The Poet works because of the juxtaposition of Womack’s feral growl with the album’s sweet, smooth, urbane soundtrack. This is grown-up, sensual music; from So Many Sides of You to its epic closer Where Do We Go From Here, this is a luscious collision of Womack’s soul mastery and slick musicianship. It rises and falls, with Womack sidestepping cliché thanks to his preaching, heartfelt delivery. For example, when he cries “I wanna dedicate this song to all the lovers tonight / And I expect that might be the whole world,” on If You Think You’re Lonely, it sounds honest, simple and sincere.

The Poet put Womack back on the map, and gave him his first US R&B chart-topper and first mainstream top 30 album. It was adored in the UK, and sent many back to investigate his grittier 70s heyday as an albums artist. The album became the best-selling record of Womack’s career but sadly it didn’t end well. He and Otis Smith locked into litigation, and the optimism wore off. Eventually freed from his deal, Womack cut the equally sublime follow-up The Poet II, released in 1984. 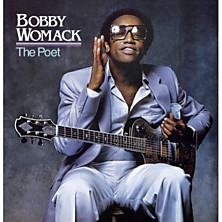