His aim is still true after all these years. Brilliant stuff.

For an era obsessed with authenticity, Elvis Costello was about as fabricated as they came. A made-up name, a lot of lo-fi hype (remember all the Stiff slogans and his arrest outside the CBS London convention?) and those Clark Kent glasses, he always looked like a ringer in rock’s perpetual race to find the real deal.

Just 23 years old when this glorious debut album was first released in 1977, it may have been touted as part of the new wave but the vintage Rolling Stones vamping of “Miracle Man” or the splendid countrified kiss-curls of John McFee’s guitar on “Alison” suggests that rather than being part of the year zero movement, Costello was always something of a great pretender: ”New wave” was always a flag of convenience for a songwriter who’d been steadily refining his craft for the previous seven years. Though Nick Lowe’s sparse production fitted with the back-to-basics ethos it was more pragmatic than politic: the budget wouldn’t stretch to anything more lavish.

When it comes to reissues the labels are damned if they do and damned if they don’t. Reissued in 2001 with a hefty plethora of bonus material, you can argue that this 30 years anniversary tie-in is a cynical attempt to milk more moolah from the long-suffering fan. The main argument against that here is that of the 48 tracks in this set, (including demos, sound checks and a full gig) 29 of them are previously unreleased or new to CD. Other than the limited-release Live At The El Mocambo, this splenetic outing by Costello and the newly formed Attractions at the Nashville Rooms marks the first official release of a complete Costello concert.

The sullen glower “Blame It On Cain” and a terrific “Lipstick Vogue” (later found on This Year’s Model) are real highpoints, along with an impromptu and wistful solo rendition of “Hoover Factory”, added when bassist Bruce Thomas snaps a string. It’s proof of Elvis’ crowd control that he can quell the punters with a song about art-deco architecture! His aim is still true after all these years. Brilliant stuff. 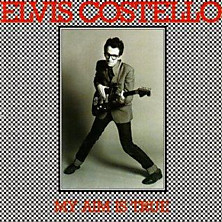