It’s rare that album research entails digging into the life and times of a 16th-century Elizabethan, but such are the life and times of one Damon Albarn. Second-guessing this man is pointless, given his jumping from cartoon funksters (Gorillaz) to African fusion (Mali Music), and from ransacking dub/jazz/rock/soul infections (The Good, the Bad and the Queen, Rocket Juice & the Moon) to stage adaptations of 16th-century Chinese novels (Monkey: Journey to the West).

The Blur singer’s muse resembles an uncontrollable minx, following any interesting scent, never mind the logistics and latitude. A concept album about (says Wikipedia) “an English mathematician, astronomer, astrologer, occultist, navigator, imperialist and consultant to Queen Elizabeth I... devoted to studying alchemy, divination and Hermetic philosophy”? Sure. It beats sparring with Suede or Oasis, or another day with the Pro-Tools manual.

John Dee liked to take risks too – the good doctor straddled the worlds of science and magic just as they were becoming distinguishable, or as Albarn puts it: “He walked a very fine line between the dark arts and acceptable practice.” So you can see the attraction. But Dr Dee the album – which charts Dee’s progress from brilliant beginnings to outcast poverty and ruin – doesn’t straddle 15 genres as usual; probably just three or four.

Albarn describes the record as “strange pastoral folk” and Blur ballad lovers will thrill to several resembling the likes of 13’s No Distance Left to Run, such as Apple Carts, The Marvelous Dream and Saturn (the last recalling, of all Brit-mavericks, Peter Hammill). However, Temptation Comes in the Afternoon is closer to Klaus Nomi’s madcap opera and, some unkind souls might suggest, The Black Adder (perhaps this should have been released on Ruff Trade).

Of the more obvious genre-straddling tracks (there are 18 in all, since this is the soundtrack to a stage play), Oh Spirit Animate Us straddles pastoral folk and early choral, The Golden Dawn is cinematic like Peter Greenaway, Coronation mixes early choral with samples and Preparation’s thrumming drum pattern is more Mali than Hampton Court.

Albarn has done his research but this is no dry slice of worthy academia; the way the spirit of each style interlocks is brilliant, and he continues to pull memorable melodies out of his (Elizabethan) hat. How Albarn has reached this point from There’s No Other Way, without the use of a time machine, is astounding, and an alchemic feat that John Dee would undoubtedly have approved of. 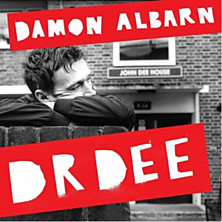