You can’t fake emotion like this, and this odd couple has it in spades.

Chrissie Hynde has been candid in her lyrics before, as the Pretenders oeuvre testifies. Yet this – just when an artist of her years and achievements is supposed to slump into cosy, risk-free predictability – is extraordinary. Fidelity! – a collaboration with 31-year-old Welsh singer JP Jones and friends – is an autobiographical love story of uncommon self-exposure. Their songs are very nearly as good as the tale behind them.

Hynde and (former Grace vocalist) Jones met (both "hammered") at a party in 2008. They kept in touch while Hynde toured the States. Upon her return she whisked him off to a swanky hotel in Havana. There they worked out the dynamics of their relationship. In love, they knew their passion was doomed by a 30-year age gap. So they decided, says Hynde, to "put all our irrational emotions of disappointment into a tale of woe, heartbreak and ultimately, redemption". She’s not kidding. The songs cover every angle of the thwarted romance, from lust to frustration to resignation. The first, Perfect Lover, is the best, as Hynde’s peerless, steely-vulnerable voice sighs, "I’ve found my perfect lover but he’s only half my age / He was learning how to stand when I was wearing my first wedding band". Like Kid, it’s a Hynde classic which drips with controlled angst and sparkles with dry wit.

The whole album turns the conventional Lolita complex on its head, and once everyone’s assimilated the shock, it may turn out to be a feminist landmark. Mostly rock-pop with a dash of country, it’s adequate music with outstanding lyrical/vocal garnish. There is, however, one problem. And that’s Jones. His grizzly, whiskey-soused voice often comes crashing in over Chrissie’s, like a Primark Tom Waits/Kelly Jones. He’s okay on his own, but the duets jar and leave you wishing he’d just let the queen of singing sing. He’s Yoko to her John.

That said, songs like the superb, soaring Australia, If You Let Me and Courage are fiery and flush. You can’t fake emotion like this, and the odd couple have it in spades. Catharsis for them, Catherine Wheels for us. 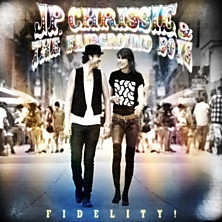