Everything about Meddle is allowed to breathe and grow.

Meddle represents the birth of Pink Floyd as we now know them today. After flailing somewhat after Syd Barrett's departure in 1968, they had a surprise hit in 1970 with Atom Heart Mother, an album comprised of a difficult side-long suite, backed with individual group pieces. In many respects, Meddle, released a little over a year later, is the same again, only with much, much, better tunes and less clutter.

Everything about Meddle is allowed to breathe and grow. Rocking opener "One Of These Days" rises out of nearly a minute of wind effects; "Fearless" delivers its slightly stoned punch over six minutes. Even the throwaway track, "Seamus", with the howling of Steve Marriott's dog over David Gilmour's blues, has a lazy charm which undermines the intelligence and ambition of the remainder of the record.

Originally titled "Return Of The Son Of Nothing", the side-long piece, "Echoes" dominates the entire work. It has a majestic grace, filling every one of its 23 minutes with the sophisticated mystery that came to define everything about Pink Floyd; slightly obscure; extremely special. Starting with a sonar pulse, the song – with one of Roger Waters' finest lyrics – leisurely unfolds before climaxing with a funk workout; after another four minutes it dissolves to atmospherics before finally returning to the main theme. This is everything right about progressive rock; engaging, intelligent and compelling.

By the time the group began to hone this innovation and vision into bite-sized chunks on their next two albums, they were to become very big indeed. 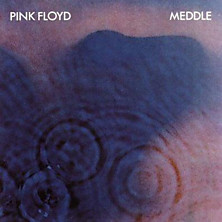