Baker’s career high is an 80s equivalent of Dusty in Memphis.

Luther Vandross aside, soul music was at something of a crossroads by the mid-80s. Aretha Franklin had been listing since the advent of disco; Whitney Houston had set about her all-conquering pop dance career; and the machine-driven productions of Jimmy Jam and Terry Lewis were becoming formulaic. However, Rapture, made by 29-year-old former Chapter 8 vocalist Anita Baker, reasserted the case for the genre.

Baker’s first solo album, 1983’s The Songstress – a lush collection of quiet-storm soul – was appreciated by the aficionados, but ignored by the mainstream. By the time she signed to Elektra in 1985, she had been working as a secretary after her old label folded. Together with old Chapter 8 producer Michael J Powell, Baker corralled the best songs and session players to create an expensive-sounding album of – as it was described at the time – “fireside love songs with a little edge”. Baker had wanted to make a jazz album, Powell a soul one, and the creative tension led to a successful compromise.

Baker’s voice rings like a bell. Her gospel past shines through on Been So Long and You Bring Me Joy. The re-working of The Manhattan Transfer's Mystery is remarkably assured.  It is, however, for three tracks on this album that she will always be remembered: Sweet Love, Caught Up in the Rapture and Same Ole Love. The lyrics, which could border on the trite in another artist's hands, are invested with so much passion and wonderment that they are like updates of old love sonnets.

Rapture was much-loved when it was released and made Baker the doyen of sophisticated soul. It united highbrow (Rolling Stone and even leftfield UK magazine The Wire loved it) and the popular. It chimed especially with the American public, resting high in the albums chart; and the US industry, winning two Grammys.

Baker went on to have a long-lasting, multiple-platinum US career. However, nothing since has quite hit the spot as this. Rapture survived being hijacked by the dinner party crowd and over-familiarity. Had it been recorded in the 60s, it would be as revered as Aretha Franklin’s Muscle Shoals recordings or Dusty in Memphis. 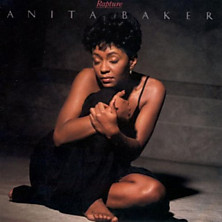