Assured and sophisticated acoustic jazz with deep roots in the tradition.

On its release in 2011, Aquarium’s eponymous debut signalled pianist Sam Leak’s full emergence onto the UK jazz scene as a versatile composer and instrumentalist.

There was a powerful sense of storytelling about his first collection, and this follow-up exhibits a similar narrative urge. Its originals seem to provide snapshots of people, places and conversations, like a volume of loosely connected short stories.

In fact, the undeniable influence of 60s piano jazz can be felt throughout the album.

The onrushing Catherine Grove harks back to the meaty urgency of Chick Corea’s iconic trio with Roy Haynes and Miroslav Vitous circa Now He Sings, Now He Sobs, with Leak’s solo tracing out a long, looping right-handed storyline of the kind Herbie Hancock developed with Miles Davis.

Scribbles and Scrawls announces itself with a prancing, Paul Bley-like fanfare before diving into spirited free-bop full of fleet melodies and racing runs, pushed on by Blackmore’s cantering energy.

The musicianship is of the calibre you’d expect from these four highly trained and experienced mainstays of the London scene.

Double bassist Calum Gourlay shows a sensitivity and restraint throughout. Blackmore digs deep into propulsive swing but, on Clutter, also revels in the kind of goading, fractured grooves he brings to his trio with Corey Mwamba and Dave Kane.

Allsopp’s tenor reveals a smooth and full-bodied maturity quite distinct from his earlier histrionics with breakthrough band Fraud. Witness how, on Milan, his strident, clear blowing authoritatively guides the rumbling opening cadenza into a sighing ballad.

And Leak’s playing resounds with a highly melodic sensibility, tracing long, full lines crammed with ornamental flourishes that echo Bach as often as they do Keith Jarrett.

No one is going to suggest that this music is breaking new ground. But that’s clearly not its intention. This is assured and sophisticated acoustic jazz with deep roots in the tradition, that knows exactly what it’s trying to do – and succeeds. 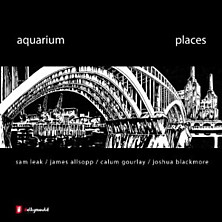