After a string of excellent mixtapes and releases on independent labels, Wiz Khalifa (aka Cameron Jibril Thomaz) was due a decent shot at the mainstream, and Rolling Papers pretty much offers that up. Two tracks in particular, Star of the Show and Fly Solo, let Khalifa show off real skills – solid, reliable beats with a woozy, almost whimsical layering of synths and keyboards building an engaging musical landscape around them.

It’s a method that succeeds for most of the record in several different forms: sparse (Rooftops); taut and bouncy (Black and Yellow) and almost symphonic (When I’m Gone). Apart from some of the tedious subject matter – being stoned, drinking etc – it’s the sort of rap that deserves mainstream attention as it’s musically thoughtful and endearing beyond the dancefloor. Bizarrely, though, it’s when Khalifa sets his sights on the pop world it begins to fall apart.

Roll Up, No Sleep and Get Your S*** sound like obvious choices for singles – although the latter’s brainless misogyny will probably count against it – and, as such, are probably the weakest tunes on the album. Not because there’s anything particularly wrong with them, just that they’re nothing you haven’t heard before. Many times. It’s that kind of bland, mid-tempo, chugging that trips over itself trying to be chart-friendly: the mixes are over–cluttered the frequent choruses and odd bits of shouting in the background serve to highlight the half-heartedness off the half-sung rapping. All perfectly acceptable, and enough to get noticed by daytime radio, but totally lacking in ambition or imagination.

It’s a waste, really, because he proves he’s got the ability to do much better than that while still looking at the wider market with tunes like Wake Up and The Race. They pull off the same sort of thing, but inject enough character into the layered vocals and intriguing music to create something of real interest, because you’re never quite sure what’s coming next. The former hooks you in with clever, not-there-at-all beats, while the latter is a lovely, breezy example of the sort of summertime hip hop you used to get back in the Fresh Prince days; but that charming naivety is more than compensated for with meticulously put together music. These are the sort of songs that mainstream hip hop needs, and would probably find much more entertaining than what tends to get pushed at it. 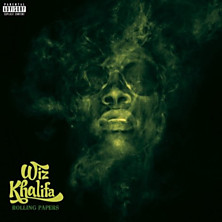