'To this multi-stranded, complex but extremely popular regional form, Spasiuk brings a...

Everyone and everything in Argentina is borne of a mixing of bloods, cultures, trends and topographies. Everyone knows the great urban fusiontangoand many have heard the Andean 'criollo' (Spanish-Indian Creole) hybrid folk sound of Mercedes Sosa and Atahualpa Yupanqui.

Far less well known is the music Chango Spasiuk plays- chamamé, a warm-hearted, accordion-based rhythm that taps into native Guaraní, Spanish, Brazilian, criollo and European traditions. Its natural home is north west Argentina (Spasiuk is from the deep green province of Misiones, made famous in the Merchant Ivory film The Mission, and much visited for its awesome Iguazú waterfalls).

To this multi-stranded, complex but extremely popular regional form, Spasiuk brings a daring, virtuoso accordion style and elements of his own Ukrainian family roots. It was in fact the polka that gained him a following outside the folk circuit several years ago in Argentina, and he still includes several in his live repertoire.

This, his seventh album, pulls together traditional songs and some of Spasiuk's own compositions from his most recent - and best - three albums. Throughout, he explores the tropical, dance-oriented, usually upbeat chamamé genre much in the manner of Piazzolla testing and pushing the tango. Tapping into chamamé's less obvious melancholy strains on "Preludio a um beija-flor" and "La Ponzoña", Spasiuk still manages to tease out sweet, seductive strains. During track 11's polka, we've got one foot in Kiev and the other in subtropical Argentina - both are dancing.

Both Piazzolla and Yupanqui are definite inspirations here ­- but so are Bartok, Tchaikovsky and the great writers of classic chamamé, Cocomorola, Montiel and Martínez Riera. This rich brew of classical, folk and modern musical influences makes for a sometimes clamorous collage of phrases and no end of digressions, but chamamé's gentle, seductive swing underpins the whole.

It's a complicated journey to the bottom of a musical style so unknown outside Spasiuk's home region. But it is always enjoyable, and there is a searching, quasi-mystical element in Spasiuk's whirling, wandering solos -­ he talks of a 'vacio' or 'nothingness', a place to which only music can take you (track 7, an 'improvisation', finds Spasiuk in full-on abstract, ambient mood).

Others will perhaps find a more earthy quality in the sound - sourced in chamamé's easy tempo and barn-dance spirit, which springs from a community-based celebration of everyday rural life, long train journeys, family ties and a sharing of woes and wonder. Somewhere between these two extremes - the metaphysical ponderings and the mooing of cows - Chango Spasiuk is making a powerful musical case for chamamé.

Strong support, in particular Sebastián Villalba on guitar and vocals, and Chacho Ruiz Guiñazú on percussion, keep the rhythm a constant delight. The disc is breezy and refreshing, and reveals an utterly new side to the Argentine soul. The accordion is hardly a fashionable instrument - but try this one. You'll surprise yourself. 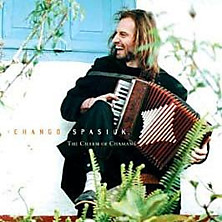