Jazz hip hop comes of age on this near-perfect album...

If A Tribe Called Quest had stopped with their first album, People's Instinctive Travels And The Paths Of Rhythm, they’d still be regarded as a seminal hip hop act. For one summer in 1990, alongside the strains of Madchester, the streets resounded to the sound of “Can I Kick It?” and “I Left My Wallet In El Segundo”. The laid back style of Q-Tip and Phife Dawg over the jazz sampleology of Ali Shaheed Muhammad, along with the daisy age raps of De La Soul, almost single-handedly defined the alternative rap scene, where intelligence and musical nouse replaced guns, hos and bragging. So when they followed it up with as close to a perfect album, The Low End Theory, their place in history was assured.

Low End… pushed the jazz connection even further with a sparse but not quite minimal selection of grooves built around some exquisitely chosen upright bass samples, and in the case of “Verses From The Abstract” actually utilising the real-time skills of legend Ron Carter. Remember that this was in direct contrast to the West Coast G Funk about to explode onto the scene. Like its predecessor it combined humour with insight to show the world that ‘rap’ needn’t be equated with the worst aspects of the American dream. Q-Tip and Phife’s posse flows were, by this point, honed to perfection, with most tracks seeing them bounce off each other like some funked-up game of table tennis.

Amidst the self-deprecation there was some serious stuff as well with issues of misogyny (“The Infamous Date Rape” and “Butter”) and rap’s descent into brutalism (“Rap Promoter”, “Show Business”) being addressed. But overall this is another feel-good mix of smart grooves and the wittiest rhymes this side of Noel Coward. It also introduced the world to the bizarre mind of Buster Rhymes (“Scenario”).

Acclaimed as one of the best 100 albums of all time by Rolling Stone, The Low End Theory remains one of hip hop’s defining moments and deserves to be in everyone’s record collection. Probably now more than ever… 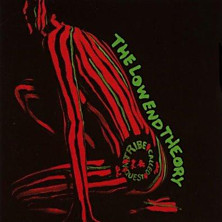