...Will not just raise the dead, it will raise the spirits of Bad Seed fans old and...

As a child, Cave claims to have be traumatized by the tale of Lazarus. ''We are all… in awe of the greatest of Christ's miracles... but I couldn't help but wonder how Lazarus felt about it,'' the black-haired one says. Cave’s Lazarus finds himself unwillingly raised in New York full of confusion: ''I can hear chants & incantations & some guy is mentioning me in his prayers!!! I don't know what it is but there is definitely something going on upstairs''. The album also takes in the escapology of Harry Houdini – whom Cave classes as the second greatest escapologist after 'Larry' himself.

The Night of the Lotus Eaters, written with Warren Ellis, (haunting lyrics, thumping repetitive beasts, rock guitars and eerie percussion) is for all the traditional Seeds fans who like to be scared at night.

For those who like a little more humour in their gothic rock, there is plenty... Try these quips on for size: ''He had a psychotic episode on a dude ranch that involved a bottle of ammonia'' or ‘‘I feel like a vacuum cleaner, a complete sucker''. And whilst We Call Upon the Author to Explain uses more than two turntables and a microphone, in true morose style, it lists all the things that are wrong with the world: '' O rampant discrimination/mass poverty/third world debt/infectious disease/ global inequality and deepening socio-economic divisions...We Call Upon the Author to explain''. Indeed.

But there's something more Springsteen than traditional Cave in More News From Nowhere and Hold On To Yourself, which may have traditional fans squirming, but entice new ones.

Clearly with Today's Lesson and Lie Down Here (& Be My Girl), Cave has lyrically moved on from moribund biblical subjects to sexual biblical subjects. He admits at 50 to be just as obsessed with sex as he was in his youth.

The Noble and Webster cover announces this is going to be a biggie. And, accompanied by the viral trailers on YouTube, it may just be his biggest yet.

Dig, Lazarus, Dig!!! will not just raise the dead, it will raise the spirits of Bad Seed fans old and new. 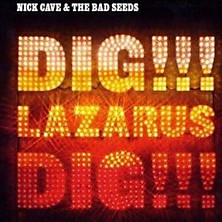