Reminded us why the Stones, even at their most dishevelled, weren’t to be underestimated.

Like a musical scrapbook chronicling the decay, decadence, excess and torpor of the Stones’ camp, this rough and ready collection of curios, questionable filler, and the occasional flash of blazing brilliance is frequently hailed as one of the best all-time albums.

At first glance it’s not easy to see why. Jagger is sometimes barely audible in the already overcrowded channels, as though his parts are a grudging concession to commercial needs. Just about every track is filled with knotted tangles of drums, keyboards, horns, guitar, hoots, handclaps and sundry embellishments, all snarled up in the often impenetrable murk of the mix: a bit like the aural equivalent of your soles sticking to a grungy club carpet.

Like the band itself, the record was strung out between different locations and times. A newlywed Jagger was understandably distracted, whilst Keith Richards was holed up in the squalid luxury of his southern France mansion awash with drugs, booze and a legion of hangers-on. Such was Bill Wyman’s distaste for the company kept at Chez Keef, he was only on eight out of a possible eighteen backing tracks. Indeed it could almost be a textbook demonstration of how not to record an album.

Yet out of such adversity there emerges moments of astonishing intensity that you find yourself forgiving them their industrial-quantity sins. The hard-won insolence of Tumbling Dice (rumoured to have gone into 100 plus takes) and driving urgency of Rocks Off, whilst being busy full-on Stones highpoints, somehow find their match in the stripped-back minimalist slapback of Shake Your Hips. Elsewhere, I Just Want to See His Face sounds as though a roving microphone had chanced upon a revivalist meeting somewhere in the deep South of their minds.

Let It Loose - a real gem of a ballad, with cascading piano - feels like the emotional heart of the album, breaking free of the uninspired blues-by-the-numbers and too-lazy licks that dominate. When it does click together though, this is an oddly moving experience, reminding us why the Stones, even at their most dishevelled, aren’t to be underestimated. 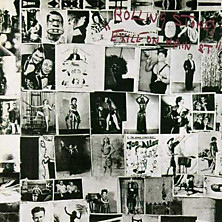