A great performer in her prime, capable of really special work.

It’s always been something of a mystery as to why Kimmie Rhodes’ profile isn’t higher. After all, she’s got a long list of musician pals queuing around the block to lend their support. In a 30-year recording career she’s worked with the likes of Waylon Jennings, Emmylou Harris, Townes Van Zandt, Tom Petty and many other limelight-hogging luminaries. Surely now it’s time that she gets her share.

That she remains somewhat on the margins of things doesn’t stop her turning in yet another potent album of touching and often powerful material. At her best, Rhodes is a sharp observer of human failing, utilising a careful, restrained economy rather than falling into the trap of the overwrought emoting that gnaws at the credibility of artists whose celebrity footprint, not to mention sales figures, is far greater than hers.

The title-track is a slow-strum opener, graciously laying out what’s on mostly on offer throughout the album: a voice that is especially effective in nailing the essence of a song without any fuss, set amidst impeccably produced and empathetic backing. But there are one or two popish diversions. Muscular horns rustle up a slightly wacky Willie and the Hand Jive-type vibe on the radio-friendly Luh Luh Love, and Joe Ely’s weather-worn voice adds grit to an introspective but agreeable cover of Donovan’s Catch the Wind. Though enjoyable, such tracks aren’t always the best place to see how special an artist Rhodes can be.

For that, you need to check out Back Again, a brooding contemplation where she sings about memories having flown "into the blue that never is". A wonderfully evocative number, songs like this showcase a great performer in her prime. 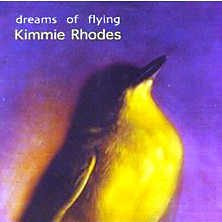