Ten-year overview showcasing the talent of an electro A-lister.

Matthew Herbert is an A-list producer of electronic music of the more cerebral strain. But this five-CD, 10-year overview of the British artist’s work (spanning 1996-2006) raises an interesting question about our very understanding of the word "producer".

From one point of view, all the music here reinforces the agreed-upon definition, that of a skilled navigator of drum machines, programmes and audio software as befits any modern bedroom beat-maker fallen under the spell of musical pioneers ranging from Lee Perry to Larry Heard via Kraftwerk.

However, repeat listening of Mistakes, Rude and Going Round makes it clear that these and many other tracks have such artistic depth because they betray the deft hand of a musician as well as, most importantly, an arranger.

The latter is a sorely underrated skill. In real terms, it means patchworking motifs, chords and effects to embellish a central theme, and it becomes a magical art when the components are so interlocked they act as the warp and weft in one piece of material.

Hence on the lusciously prickly The Audience, the staccato, offbeat keys and drums, slasher-movie violins and Dani Siciliano’s grainy voice are related ricochets on a jolting pulse.

This and other tracks stoke a never-resolved tension between Herbert the rhythm demon and Herbert the melodic angel.

It soon transpires that the volleys of twisted, agitated syncopation and waspish dissonance see him build on the 80s synth-soul proto-house of Raze, D-Train et al, and consolidate their kinship with Prince, which sees Herbert at his most texturally audacious.

Some of the latter’s masterpieces have whirling orchestral sensibilities. Thus it makes complete sense for Herbert’s digital dances to open up to the grandiose sweep of Scale, which, by way of 80 strings and horns, makes the point that European classical music and American swing can have surreal as well as stately characters.

It gives credence to the old adage, “There’s nothing new under sun”. One might add that no two pieces of sky are the same. 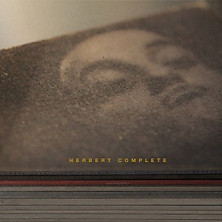