Throughout these players are a match made in Heaven...

This is a sprightly romp through some of Dutch pianist Mengelberg's back catalogue, with a sprinkling of his favourite Thelonious Monk tunes for good measure. Beautifully recorded on a rare trip to NYC after a weeks engagement at the Iridium, Misha is joined by his long time sparring (or should that be chess?) partner Han Bennink on drums, as well as Americans Brad Jones on bass and Dave Douglas on trumpet. Such preparation has yielded great results, and from the off this band is on fire.

"Hypochristmastreefuzz" was written (as Misha put it) "to set Eric Dolphy a little off balance", and can be found on Dolphy's Last Date from 1964; this time it's Douglas' turn to try the convoluted theme. He's hardly under-recorded at the moment, but personally I can't get enough of him. He has already shown an affinity to playing with Bennink on two previous recordings, and like saxophonist Ellery Eskelin (check out Dissonant Characters on Hatology) he rises to the challenge with wit and authority. Lesser players may be intimidated by the mercurial percussionist, but here sparks fly in a playful way; it's true group music.

Both "Reef" and "Kneebus", were given very different treatments by the Berlin Contemporary Jazz Orchestra on an excellent ECM release a few years ago. "Reef's" tip-toe melody is underpinned by Jones' expressive bowed bass. In fact in such exalted company, it's easy to overlook the bassist's contribution; his unaccompanied introduction to "Monk's Mood" is a reminder that there are no passengers in this group.

Throughout these players are a match made in Heaven. In Douglas, the group has a virtuoso with fire and stamina that doesn't play for effect but for the music, as attuned to Stravinsky as much as Monk. The Dutchmen provide inspiration and challenge in equal measure. There's a spirit and shared humour that's infectious, beautifully exemplified by "Kwela P'Kwana" a rollicking tribute to the late lamented South African saxophonist Dudu Pukwana. Two Mengelberg compositions close this fine release; the Herbie Nichols-like "We're going out for Italian" and "Poor wheel". There can't be many songs these days that are inspired by a squeaky wheel on a deux chevaux. More's the pity; delightful stuff. 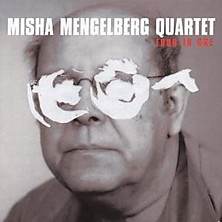