A jazz group questioning the divide between genres and points in time.

The buzz around this New York ensemble has grown to a roar over the last few years, which is a delicious irony given that The Claudia Quintet is often at its most affecting when playing sotto voce, as if content to whisper rather than bellow into the listener’s ear. The instrumentation partly explains this. Ted Reichman’s accordion, Chris Speed’s clarinet, Matt Moran’s vibraphone, Drew Gress’ double bass, John Hollenbeck’s drums and (guest) Gary Versace’s piano often blend into an ensemble sound that has the vaporous drift and haze that one might associate with hushed ambient electronica or at least very produced or studio sculpted music.

There are many moments on this, the group’s follow-up to their much-loved 2007 set, For, in which sounds hover and glide and then incrementally shift weight and trajectory to create the kind of textures and tightly mapped grids that are reminiscent of artists such as Manitoba/Caribou. But the improvisatory dynamic of the music is too strong for it to be too confined to a serial-based aesthetic, and although the repeating marimba figures of Steve Reich are a clearly discernible element of the Claudia sound, the band regularly breaks out of a scored framework to create the slide, swerve and omni directionality that largely defines jazz. The solos are often no more than 20-odd bars on some songs, which to a certain extent makes them stand out more, as if they were a planned chip or crack in the leaning, rococo architecture of the music. On Keramag Gress’ bass tells a brilliantly gentle short story which serves to heighten the impact of Hollenbeck’s funky drumming, while elsewhere there are some very novel juxtapositions of staggered African rhythms and ostinatos of hard to define noise.

However, Claudia’s timbres, eerie and winsome in equal measure, prove its greatest strong point. The combination of clarinet, accordion and vibraphone fashions an electric whistle and whir that squares the circle between 90s indie science frictioners Stereolab and 60s proto-proggers Soft Machine, making it clear that Claudia is a jazz group questioning the divide between genres and points in time. 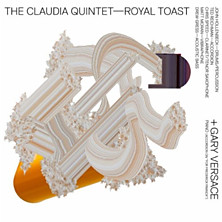