These days Neneh Cherry seems as happy to be known for her cooking as for her music. But back in 1989 she took the world by storm when she served up Raw Like Sushi, an intercontinental melting pot of rap, soul and pop influences that yielded hit singles Buffalo Stance, Manchild and Kisses On The Wind.

Born in Sweden to a highly bohemian family (musician father and stepfather, artist mother) and gaining an impressive pre-fame musical pedigree (rubbing shoulders with such reggae royalty as Bim Sherman in Adrian Sherwood's New Age Steppers) Neneh's feisty femininity breathed life into late 80s chart scene. Though other successes would follow – most notably international smash 7 Seconds with Youssou N'dour – she would never recreate the impact of her debut.

Much of that impact can be attributed to starting the album with the biggest tunes. Buffalo Stance, with its undulating synths, ''You go girl!'' sentiments and killer hooks is every bit the floor-filler it was ten years ago. The offbeat, ambient ballad Manchild (co-written with Massive Attack's 3D) showcases Cherry's maternal side, while the Cuban-tinged Kisses On The Wind's autobiographical words give an intriguing insight into a young girl who wanted to be remembered for more than just her incredible looks.

The quality does dip a little once we get past the hits, with lots of sub-Prince keyboard funk and mocked up party FX. The straight rap tunes have dated the most, but Neneh's lyrics are a hoot - slamming together pop culture and pop psychology with endearing results. Compared to the raunch of today's charts, her attitudes are unusually tame (''My body is clean but my mind is bad'', ''he wasn’t impressed cause I wouldn't get undressed'') valuing love, monogamy and genuineness above all else. Other plusses include a nice nod to her reggae past on duet My Bitch - when Gilly G breaks into the first verse of Leroy Smart's Happiness Is My Desire - and some stripped down remixes of the singles which give the album a closing lift. Frontloaded it may be, yet most of Raw Like Sushi still sounds fresh. 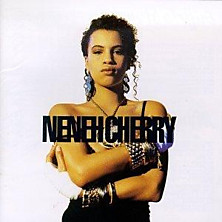