Allows you to truly share the live experience of an artist at their pinnacle.

Recorded on Friday 6th October 1972, Bill Withers Live At Carnegie Hall is one of those rare in-concert albums that puts you right there in the room. It's like for one night only the Apollo in Harlem had moved 68 blocks downtown.

Captured on a night of heavy rain, Withers is genuinely humbled by the reaction of his audience. He thanks his crowd repeatedly for coming out in it, and the magic crackles from the start. Opener Use Me goes down so well, he gives in immediately to the multitude and plays it again.

His easygoing command of the situation can be heard in the band introductions in Friend Of Mine, and his passionate reminiscing about his grandmother before Grandma's Hands. His denouncement of war as, ''one big drag'' on the intro to the show-stopping anti-Vietnam I Can't Write Left Handed (later the sample for Fatboy Slim's Demons) is most poignant.

Bill Withers is one of those artists, who after hearing a few tracks again, you wonder why you'd ever listen to anyone else. Here, you have stunning versions of Ain't No Sunshine, Lean On Me and a take of Harlem that brings the house down. As he wrote in the original notes for the album, ''in about an hour and a half that audience transformed us all from nervous, serious musicians into free and happy people. I know I'll never forget it''.

If you know this album well, you’ll never forget it too. If you are unfamiliar with it, go hear it immediately. It is up there with James Brown Live at the Apollo 1962, Aretha's Amazing Grace or Van Morrison’s It's Too Late To Stop Now for allowing you to truly share the live experience of an artist at their pinnacle. 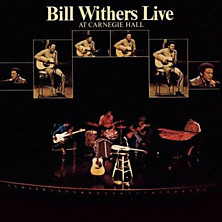