It took The Pierces four albums to evolve from mistresses of knowing folky quirk into genuine contenders owing as much to peak-period Fleetwood Mac and The Bangles as Bat for Lashes and Kate Bush. It’s taken all-female trio Stealing Sheep a couple of EPs and this debut to make a similar journey. They eschew the Pierce sisters’ US west coast influences, but in one giant leap they’ve announced themselves as great prospects.

Stealing Sheep have been quietly building a reputation since forming in a Liverpool city centre café in 2010. Those EPs and a brace of sparkling singles whetted appetites and, with Lykke Li, Florence Welch and Regina Spektor edging into the mainstream, the musical sands have shifted their way.

Unashamedly folk-influenced, but much, much broader of palette, Stealing Sheep operate as Queen did before Innuendo, in that Becky Hawley, Emily Lansley and Lucy Mercer contribute songs separately. Then (as with Queen, but there the similarities end), the group merge in the studio to shine and polish the rough diamonds.

Their calling card is simple in theory: divine harmonies which take in Swingle Singers-like fireworks on Shut Eye; pounding, hand-clappy percussion which resembles a military tattoo on White Lies; and lavishly layered melodies, even when The Garden threatens to turn into first a madrigal and then The Pierces’ Secret.

Others would leave it there and claim job done, but Stealing Sheep come back for more and it’s their ear for detail that makes them so potentially special. Circles sounds threatening and cheery in the same breath, but maverick enhancements abound, be it the startling brass which cascades through White Lies, the Krautrock keyboards which infuse Gold and the whole of Rearrange, which somehow finds room for a guitar solo surely inspired by Classical Gas.

They save the best until last with the outstanding Bear Tracks, which begins sparsely with drum and Lansley’s voice, before exploding into something altogether more symphonic. It factors in staggeringly beautiful, wordless harmonies, twangsome guitars, and more Can-style noodling before it pauses for breath and collapses into an Erik Satie-recalling piano coda. If they can pull this glorious folly together live, Stealing Sheep will be unstoppable. 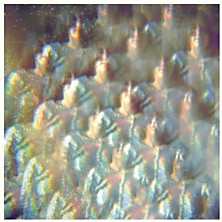