A third LP to savour from the distinctive Canadian artist.

Claire Boucher claims not to own a mobile phone. Judging by her musical output and interviews under her Grimes moniker, this is the only luddite move she has ever made, as the Montreal-based artist has again delivered some fascinating and healthily progressive music on Visions, her third album.

When not writing and recording, Boucher is happy to discuss her love of OutKast, fellow on-the-up Canadians Drake and The Weeknd and even London’s future garage champion Blawan, who she hopes to work with. As is apt for someone with such a range of tastes, Visions covers a range of moods across its 13 tracks – but, crucially, it’s rarely less than thrilling.

After a short and snappily robotic intro reminiscent of something Aaliyah might have recorded with Fever Ray, single Genesis kicks things off. Boucher’s exquisite falsetto rolls over simple synth melodies, thudding bass and crisp beats more at home on a pirate radio station. Oblivion, another brilliant single, is next and is a perfect companion piece to Genesis. It’s got a future-pop beat, a verse melody that sounds like Tiffany’s I Think We’re Alone Now and a whirling synth that could well summon carsickness.

Things take a swift left turn on Eight, a terrifying Cocteau Twins-go-dubstep number that will may have listeners sleeping with the light on for a fortnight, before hitting the album’s best tune. On Circumambient Boucher sings, "Oh baby I can’t say / That everything is okay," while a beat seemingly stolen from 90s Prince and echoing, overlapping synths fight it out for sonic supremacy. Vowels = Space and Time includes more vocal acrobatics, but pulls right back from the darkness and gleams like a daytime radio hit in waiting, before Visiting Statue is Madonna’s Live to Tell reinterpreted by Little Dragon at their most mischievous.

Boucher freely admits that Colour of Moonlight is built on the When Doves Cry beat, but it is a fine song in its own right. Later, Nightmusic (featuring Majical Cloudz, aka Devon Welsh, Boucher’s boyfriend) is big on sinister atmosphere yet never portentous.

There are lots of great ideas bursting out all over Visions. It’s an essential culmination of Boucher’s hard work in creating a mysterious yet distinct and exciting musical identity. It combines the vocal and textural brilliance of Braids’ Native Speaker album with the punch of contemporary underground dance music and the pop nous of the best commercial RnB. One to savour. 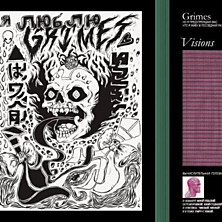