Both retro- and avant-rock fans will have a feast here.

For anyone not Swedish or having the correct phrase book handy, Skit I Allt translates as “F*** It All”. But as frontman Gustav Ejstes explains, it’s less a guide to Swedish swearing than a show of affirmative action, as in: “F*** it, do as you want, time is passing and it’s changing, forget fears and hang-ups, we are small and everything is pretty insignificant on the whole. How will it be? What shall we do? We often worry so much unnecessarily. Skit I Allt, it’s happening now.”

Even without Ejstes’ help, the ecstatically breezy, bucolic, polyrhythmic psych that constitutes the Swedes’ sixth album already suggests a world of freedom and possibilities and an absence of hang-ups and put-downs. There’s always been a mellow gene within Dungen’s superfuzz DNA, which comes right to the fore here; it’s like psych in folk-rock form (Dungen means “The Grove”) but on a jazz-rock mission. Skit I Allt is the musical version of floating downstream (anyone who knows the stunning Parsley Sound album will instantly recognise this mood) or and wandering into someone else’s dream. And like dreams, you don’t need to understand the meaning. Like Sigur Rós, Dungen have shown bands can stick to their native tongue and not lose an iota of sense because the music is, in itself, the language.

Of course, Ejstes might be singing the Stockholm bus timetable, in which case it’s got to be one hell of a journey he’s taking. Via a lightly tapped cymbal, thumbed electric piano, skittish guitar and a lead flute, the opening, instrumental Vara Snabb establishes a plateau of weightless, yet taut, serenity. It never falters, not when the following Min Enda Vän adds strings, distant drums and Ejstes’ dreamy, yet edgy, vocals; nor during the blistered blur of Högdalstoppen, which resembles Hendrix in air-sole sneakers. Reine Fiske’s guitar unwinds through Skit I Allt like threads of quicksilver, deepening the mood of 1967 vintage. Both retro- and avant-rock fans will have a feast here.

At the end of the trip, Blandband (translated: “Mixtape”) is another sundappled instrumental before Marken Låg Stilla displays the glint of a pop song – proof that Ejstes has more at his command than psilocybin tranquillity. To further the point, the album’s 10 tracks total just 34 minutes, so listeners will snap out of the dream rather than disappear with it down a wormhole. But the blissful summery mood hangs around for ages. If you don’t want summer to end, or you’re a SAD sufferer, then consider Skit I Allt the best and cheapest antidote on the market. 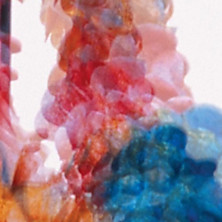