This music is supple, brilliant and flawless, with performances to match. By turns...

Few composers of however radical a stamp can resist the string quartet for ever. Philip Glass and Steve Reich have both made use of the grouping in different ways. Another great post-Minimalist, Michael Nyman is most widely known for his film music (most famously The Piano). In this collection of three of his four quartets to date and miscellaneous arrangements, how does he square up to the giants of the quartet repertoire?

The answer is that he probably doesn't care and isn't trying to anyway. But since Nyman started his career as a musicologist, and as a composer regularly dips into the historical grab-bag in search of material (In Re Don Giovanni from this disc paraphrases one of the all-time geniuses of the string quartet, Mozart), it seems a fair question.

The music on this disc doesn't develop or change overmuch. Once a movement has plotted its course, often based on rhythmic or harmonic repetition, it usually sticks to it. The same could be said for the course of Nyman's career as a composer. He seems to have found a formula which works very well and stuck to it. Don't expect the sound of a soul searching, the human agitation and development of Haydn, Beethoven or Bartók. Nyman occasionally sounds like a bar of Bartók played over and over again, but he isn't likely to go to any of the places Bartók went. This isn't to disparage Nyman -this music is supple, brilliant and flawless, with performances to match. By turns balletic and mournful, its rhythmic sense is unerring throughout, and there's enough subtlety to reward repeated listening.

Nyman is a practical composer, and most of this music was written to commissions: the second quartet for a choreographer, the third for a TV documentary and the fourth for a fashion show. Given the diverse inspiration and genesis of these works, the style is surprisingly consistent.

The only discordant notes in the collection are the filler tracks, If and Why, in which the beautifully liquid saxophone of Simon Haram unfortunately fails to redeem two tracks of what can only be described as sentimental mush. Which fortunately doesn't stop the CD being a pretty enjoyable ride. 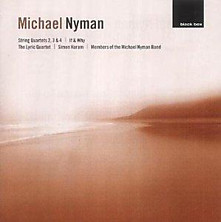