A cacophony of noise with one saving grace.

To see the name Pritam on the cover of an album usually inspires a level of optimism regarding the music that will be found within. Whether out-and-out Bollywood in Meri Yaar Ki Shaadi Hai, dance tracks in Dhoom and Dhoom 2 or exploring boundaries in Life In a… Metro, there’s no doubting he has quite rightly gained his place as a prolific composer. This is, after all, the man who can claim to have brought Snoop Dogg to Bollywood, as part of his soundtrack to Singh Is Kinng.

It is this reputation that makes the soundtrack to Badmaash Company all the more disappointing. There are only five original songs on the album, with two tracks remixed – presumably to provide some padding, as there is certainly no musical merit in these additions. It begins well enough, with the energetic vocals of KK on Ayaashi, but even by the time the chorus of this opening song is reached things are beginning to fall apart. Lyricist Anvita Dutt should probably be advised that phonetically spelling out a Hindi word in English does not equate to an edgy use of language. This pattern of uninteresting music paired with glib lyrics is heard again in the innocuously titled Jingle Jingle and the album’s title-track.

The only saving grace of Badmaash Company is the track Fakeera, which is so significantly superior to the other four pieces that it almost feels like it doesn’t belong on the album at all. The melody is delightful, with an arrangement that is a wonderful marriage of Bollywood melodrama and Pakistani rock. The lyrics are surprisingly adept, and it is executed to vocal perfection by one of India’s new (albeit adopted) stars, Rahet Fateh Ali Khan. It does not quite make the rest of the soundtrack bearable, but it is a very good reason to endure it.

This album seems to have been put together in a rush, and feels like it is trying too hard to live up to some idea of popularity. The result, bar one good track, is a cacophony of noise that doesn’t live up to the reputation of Pritam as a composer. With a number of projects in the pipeline, it can only be hoped that this was a blip on his musical score sheet and that the next soundtrack will be a return to the quality for which he is respected. 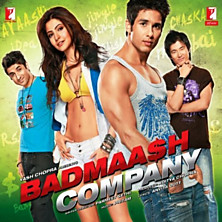