There’s no getting round it: Shearwater’s latest is a profoundly beautiful record.

Buoyed by Jonathan Meiburg’s tremulous vocals and constantly in thrall to the natural world, Shearwater’s music is a rich, suggestive thing. Probing appreciation of our environment has manifested itself across their discography; most recently on 2008’s excellent Rook, which masterfully evoked all manner of avian concerns (principally, that of flight itself). The Golden Archipelago is the third in a loose trilogy also comprising 2006’s Palo Santo, and finds Meiburg broadly contemplating life on remote islands, many of which he’s actually visited.

Numerous acts have plied similar waters in recent years (fine offerings from Bowerbirds, Midlake and Andrew Bird spring to mind), but with The Golden Archipelago, Shearwater really go for broke – a limited run of Meiburg-assembled ‘dossiers’ were even made available, illuminating its central themes via his studies. These themes constitute far more than just a jumping-off point for the group: they’re intrinsic to the record as a whole. Indeed, it’s not the band that greet you upon first listen, but the defiant strains of Bikini Atoll’s national anthem, sung by exiled Bikinians on their adopted isle of Kili.

The band enters with the bare, lilting swell of Meridian. Meiburg’s vocals lapse into such aching falsetto that he could literally be singing the Idiot’s Guide to Value Investing and you’d still root for him; that he’s relaying a tale informed by his grandfather’s wartime experiences in the South Pacific makes it all the more poignant. In contrast, Black Eyes is a jarring, serrated affair, which sees him hollering his lyrics over a magnificent racket. When they want to be – like on the dissonant swirl of Corridors, or the climactic breaks of God Made Me – Shearwater are an exceptionally noisy band, propelled by a staggering range of percussive elements courtesy of drummer Thor Harris. For the most part, however, they revel in dreamy, capacious arrangements (Talk Talk’s Spirit of Eden is a long-cited touchstone), and The Golden Archipelago eases into a leisurely second half before bowing out with Missing Islands, where Meiburg’s vocals take the spotlight against plaintive ivories to show-stopping effect.

There’s no getting round it: The Golden Archipelago is a profoundly beautiful record. Replete with moments of jubilance and tranquillity, cataclysm and contemplation, it feels like the successful culmination of everything the band have been aiming towards over their career to date. An assured, often fascinating and eminently listenable set, it’s less an album, more a bona fide artefact. 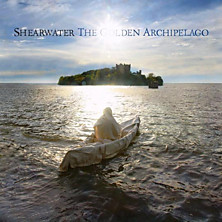