'Arcangelo Corelli published Opus 5 on 1st January, 1700, his one and only set of violin sonatas, and arguably the finest and most influential ever assembled...all other baroque sonatas can be defined as being pre- or post-Corelli', says Andrew Manze as he begins his booklet note for this new recording. As you listen you realise he and Richard Egarr have put their money firmly where his mouth is: I've never been more persuaded of the greatness of these sonatas than I am here.

Why? What makes Manze and Egarr's approach so persuasive? Well, in many respects it's exactly the same qualities that have made their previous collaborations rewarding. This is a genuine musical partnership forged on stage in live performance, prepared to approach this repertoire as Corelli and his peers must surely have done with the spirit of improvisation uppermost in their minds and fingers. After all, he left only a bass line and the unadorned violin part, with no harmonies, figurations or ornamentation - baroque performers were supposed to have a modern jazzers ability to fill in the gaps, so every performance would have an imaginative spontaneity that's missing from most modern recordings.

Those old skills are hard to find, but Manze and Egarr have them in spades, sparring with one another, reacting lightening-fast to each other's ideas and imaginations, unleashing a wider range of tone colours than I've heard in these sonatas before. There's the quietest, querulous stroking of the string, with judiciously applied expressive vibrato to heighten the emotional weight of a phrase, and the most extrovert virtuosity: fleet fingers, Manze's swiftly darting bow, and dazzling ornamentation (especially from Egarr, whose sweeps and surges over the keyboard can be quite breathtaking). They eschew the Amsterdam edition of 1710, which came fully ornamented - an obvious shortcut for 21st century performers who haven't acquired the ability to improvise like this pair. As Manze puts it, 'reheating' these ornaments goes against the spirit of improvisation, and diametrically opposes the practices of the time: incarcerating the living music behind the glass of a museum display case.

Corelli's Sonatas have never felt more alive and less perfectly preserved than they do here, and if you care at all for the baroque repertoire or fine fiddle playing, you owe it to yourself to hear these exhilarating performances. Everything's come together for this one: repertoire, performers, recording, notes, even the perfect artwork for the cover. From the gentle questioning of the First Sonata's introduction to the insanely entertaining Follia variations at the end, this is a recording that will open ears and minds. I suspect some academics will hate this, but there's nothing academic about this music, dammit: just buy these CDs and have fun! 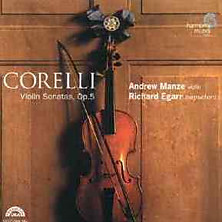