Denman Maroney plays 'hyperpiano'. Before you start thinking that might be a very large piano set on the outskirts of town, think again. it's actually his term for the process of playing the piano in any number of ways other than just simply hitting the keys (though he does that as well). This use of prepared piano owes equal amounts to John Cage, Ornette Coleman and Charles Ives. He uses copper pipes, Tibetan bowls, bits of wood and rubber or even CD cases to coax micro harmonies, creaks, groans and unearthly sounds from the strings over a series of improvisations by a band made up of Ned Rothenberg (reeds), Dave Ballou (trumpet), Reuben Radding (bass) and Michael Sarin (drums). It's a surprisingly accessible success, too.

While you may assume that such free form exercises in tone and texture may be a little lacking in form you'd be wrong. Maroney's system of temporal harmony allows him to improvise and compose in several tempos at once. Aided by Sarin, Udentity - split into seven parts - contains some remarkably toe-tapping moments. While the shorter numbers throw up some interesting ideas it's the longer work here (I, III and VII) that bear the most fruits. Mixing rhythms, changing focus and giving themselves space to, say, move from a funky backbone to a softly morphing display of boeing and scraping, aided by the grunting of Ned Rothenberg's sax or oboe.

Indeed the whole album contains not only forays into the avant garde, but manages to root itself in some pretty traditional arrangements at times. It's playful while deadly serious about the way in which new sounds can be applied to the form. And ultimately, it's a fascinating journey. 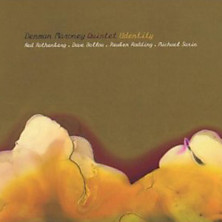