Minnie Driver Everything I've Got in My Pocket Review

Nine years ago, Driver turned her back on a record deal to pursue the bright lights of...

So you've been universally vilified by the world's tabloid press and had numerous high profile failed relationships plastered over the front pages.Given this situation, most people would tend to shy away from the public eye, not play a potentially hazardous game of critical chicken as Minnie Driver is doing.

The Oscar-nominated actress famous for her roles in Gross Point Blank and Good Will Hunting has turned her back on Hollywood and accelerated over the artistic crossroads to release her debut album, Everything Ive Got in My Pocket.

Well, what does Driver have in her musical pocket?

Luckily, it is deeper than the critical pit which the majority of crossover artists fall into, never to be heard of (or listened to) again.From it she pulls some genuinely emotional folk and country tracks intersperced with downbeat pop songs. Everything I've Got In My Pocket is entirely self-penned, apart from the beautifully reworked piano/brush-drummed version of Springsteen's "Hungry Heart".

Nine years ago, Driver turned her back on a record deal to pursue the bright lights of Hollywood; cue the creative U-turn.During a year long sabbatical from film, she worked with producer Marc Dauer and members of the Wallflowers to create this simple yet likeable debut.

Standout songs include the album's title track, which is an atmospheric reassurance to a loved one; meanwhile,"Invisible Girl"exhibits a great combination of resonant guitar, melodic acoustics and angelic harmonies, whilst "Fast As You Can" is akin to the 1970s folk of Crosby, Stills and Nash with its moaning pedal steel guitar.

Lyrically, Driver is easy on the ear as well; "Deeper Water" alludes to opening up one's heart after it is broken, whereas "Wire" is no doubt a sly pop at a famous ex: "you're the biggest kid in your own playground...Oh you tell the girls line up in single file." Everything I've Got In My Pocket is hardly breaking new ground, but if you prefer a glass of Rioja to a Double Vodka and Red Bull you might just jump aboard Driver's musical vehicle and enjoy the smooth ride. 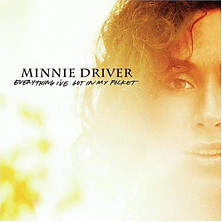