Lamontagne's album is about his long journey from a factory worker to a...

"Over a period of years I taught myself to sing from the gut and not from the nose."

So says Ray Lamontagne about his long journey from factory worker to singer-songwriter who has created a timeless album of graceful, genuine songs about heartbreak, vulnerability and hope.

Ray had been working in a shoe factory for four years, when one day he awoke at 4am, in the same manner as usual, to the sounds of "Treetop Flyer" by Stephen Stills on his clock radio. He missed work that day to get a copy of the album and then left his job so he could be become a musician. And so his music education began, he spent a huge amount of time intensely listening to Crosby, Stills & Nash, Bob Dylan, Joni Mitchell, Neil Young, Ray Charles and Otis Redding.

Lamontagne's voice is strong but with a quaver and a dry, rasping quality that hints at an inside breakability. It took Lamontagne over 3 years since his epiphany before he could start looking for gigs. He would tell himself; "You just have to find your voice, it's in there". This was someone who had problems speaking to people, let alone singing to them.

The subject matter of the album is doubtless inspired by a lifetime of travelling around with his mother and five siblings. Themes such as shelter and companionship reoccur. The story of the factory worker from Maine is certainly romantic, but how does the music stand up?

I love it. He manages to make typical singer-songwriter three chord fodder, with subject matter that's been heard a thousand times before, sound interesting and fresh. The title track, "Trouble" tells the original blues tale: "Trouble been doggin' my soul since the day I was born ... worry just will not seem to leave my mind alone." On the other hand, "Forever My friend", with a backdrop of bongos and shakers and an irregular meter, is a song of pure unbridled optimism. "How Come" speaks for many, letting rip with the lyrics "I said how come, I can't tell, the free world from living hell?".

The album's success is not without the aid of Ethan Johns, whose production skills, string arrangements, bass playing, drumming and percussion could be responsible for turningTrouble into something special.

As Lamontagne says; "Life is so difficult, the thing about music is that you can take deep things that hurt you and turn them into something beautiful." If this album were to be the result of one man's life, and he finds there isn't another in him, I think this would be understandable. A classic - listen incessantly. 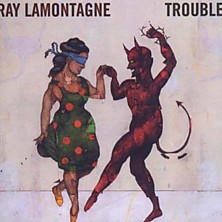