Cobra is probably the most celebrated of John Zorn's 'game' pieces (the lineage also includes Rugby, Archery and Lacrosse). Zorn guides a large and diverse improvising ensemble via cards indicating style, speed of delivery and so on, thereby getting a credit as 'prompter'.This kind of directed improvisation has its roots in the work of John Cage and Stockhausen, but Zorn's aesthetic is different. Where Cage distrusted improvisation and Stockhausen shrouded it in mysticism, Zorn seeks to have fun with it and to draw out the indivduality of the players involved.

This album reissues a live and studio (1986 and 1985 respectively) version of the piece played by the cream of New York improv talent; Bill Frisell, Elliot Sharp, Arto Lindsay, Wayne Horvitz, Christian Marclay, Zeena Parkins and Bobby Previte among others.

The results are a delirious jumpcut odyssey where fragments of styles collide and splinter apart; ambient drones, classic skronk improv noise, barrelhouse piano, funk, jazz, even a snatch of 'Roll Out the Barrel' played on an accordion. Both versions of the piece are unsurprisingly quite different, but each displays a level of wit and intensity sorely lacking in 'classical' free improvisation, where such genrehopping is frowned upon.

Zorn has chosen his arsenal of weaponry from the downtown armoury with expertise; Lindsay's trademark carcrash guitar, Frisell's mix of Nashville twang and rock stratospherics, Horvitz's and Anthony Coleman's keyboard skills and Marclay's warped (sometimes literally) vinyl intrusions all rub up against each other and create the brightest of sparks, while Guy Klucevsek's accordion wanders genially through the rubble, churning out pavement cafe minstrelsy.

Purists may insist that Zorn's aesthetic is a superficial one, reliant on the quick fix and post modernist pileup; the new music equivalent of the fart gag. Maybe so, but Cobra makes free improv fun, which is no mean achievement. Sharp, funny and sometimes strangely moving, it still stands up some 16 or years down the line. An essential document for Zornophiles and anyone interested in either the New York scene or improvisation in general. Nicely remixed and remastered, and a beautiful Art Lange cover too. Buy it and stick it on at your next dinner party. 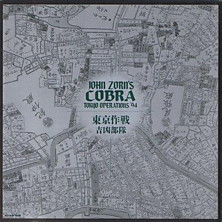