Takes you right back to the vibrancy, excitement and possibilities of the time.

Soul II Soul appeared as their own universe, complete with that old showman’s standby: self mythology. If you’re going to call an album Club Classics Vol One, it had better live up to its billing. With Jazzie B showing his then-groundbreaking Funki Dred hairstyle and apparel on the cover, it did.

Club Classics Vol One still fascinates. It is what soul sounded like at the end of the 80s, the UK’s answer to Italo-House and Daisy Age hip hop. Leader Jazzie B's amalgamation of styles provided the first really mature musical exploration of the post-rave scene.

Coming out of sound system culture, it incorporates dancehall, hip hop, soul, jazz and pop. Although the grinding beats and James Brown samples sound somewhat passé to 21st century ears, this, at the time, was truly trailblazing.

Keep on Movin’, with its upbeat message and Norman Whitfield-inspired strings, made a star of vocalist Caron Wheeler. She’d been singing backing vocals since the start of the 80s, on some of that decade’s best records. But here she was in the spotlight, her authoritative, classic R&B voice sounding electrifyingly soulful.

What really sealed the album’s fate was Back to Life, which had been presented as largely a cappella on original pressings. With its swooning chorus and churning beat, its single mix topped the UK chart and the US dance chart. Soul II Soul rose from London club obscurity to world fame in little over 12 months.

Produced by Nellee Hooper, from Bristol’s Wild Bunch collective, Club Classics Vol One paved the way for the subsequent success of Massive Attack (who provide backing vocals on Feeling Free) and the start of the trip hop movement.

The album (initially known as Keep on Movin’ in the US) was a huge international hit. Within a matter of hours everyone had a collective and a James Brown backbeat. Wheeler soon left to go solo, Jazzie B soldiered on, to varying degrees of success, but was always a formidable presence who provided British black music with its own identity. And hearing Club Classics Vol One today takes you right back to the vibrancy, excitement and possibilities of the time. 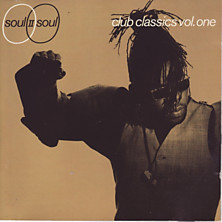