A noteworthy and historic release for several reasons.

This is a noteworthy and historic release for several reasons. It is the first time Keith Jarrett and Charlie Haden have recorded as a piano-bass duo, coming a third of a century after they last recorded together in Jarrett’s fine American Quartet alongside saxophone and drums. After a string of live albums from Jarrett, Jasmine is his first studio-recorded release in 12 years. Its release also coincides with his 65th birthday.

Jarrett and Haden were reunited in 2007 during recording of a documentary about the bassist. After they played together informally, Jarrett invited Haden home, where they spent four days recording in Jarrett’s studio. Given their recent histories of recording standards – Jarrett with his Standards Trio, Haden with his Quartet West – they unsurprisingly opted for songs from the Great American Songbook.

Classics such as For All We Know and Goodbye are given straightforward readings without any overlong solos, conveying the essence of each song. Jarrett’s piano explores the melodies but never strays too far away. Haden’s full-bodied tone and immaculate sense of time underpin everything. These versions are easy on the ear, smooth enough to be played at dinner without being a distraction – Jarrett even keeps his trademark vocalizing relatively subdued. The music also amply repays close attention, revealing fresh facets every time.

A couple of the chosen songs will raise eyebrows. One Day I’ll Fly Away, originally recorded by Randy Crawford, is given an effective reading which lingers on the distinctive melody without undue embellishment. In contrast, Body and Soul, much covered by generations of saxophonists, is rarely chosen by pianists. Jarrett delivers a prolonged exploration of it.

Throughout the album, their playing radiates the pair’s spontaneous enjoyment of each other’s company and of the songs. Although it may not be a word immediately associated with either of them, Jarrett and Haden sound as if they are having fun here. Both are now respected elder statesmen of jazz, long ago assured of their place in history and each with albums on those lists of “essentials”. It may not be too long until Jasmine itself appears on such lists. 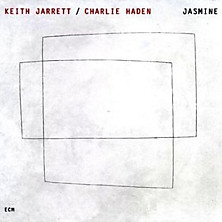