Future of the Left The Plot Against Common Sense Review

Subversion of the most intelligent, insidious, inventive kind.

Formed from the still-smouldering ashes of mclusky and Jarcrew, Future of the Left began life in 2005 and immediately re-ignited the fire of those previous outfits with uncompromising, dark-humoured, nihilistic irreverence and a steadfast refusal to play by ‘the rules’.

While the absence of mclusky was missed in alternative rock circles, there was enough bile in mainman and former mclusky ringleader Andy ‘Falco’ Falkous’ sneering lyrics and snarling delivery to make up for it. The band's sublime second album, 2009's Travels with Myself and Another, was as good as any mclusky album.

But then, as they tend to do, things changed. In 2010, ex-Jarcrew-er Kelson Mathias left the band, which didn’t bode well for the future of FOTL: the dynamic chemistry between he and Falco had propelled so much of the trio's iconoclastic, idiosyncratic excellence. But the Polymers Are Forever EP of 2011 proved there was a hell of a lot of life left in the band yet, despite (f)altering line-ups.

The EP's lead song is featured here, right in the centre of 15 tracks. Like Polymers…, what this album does more than anything is prove that nothing has changed. FOTL still hold the raw and radical power they’ve had from the start. And that’s evident just from glancing at their song titles.

The album begins with Sheena Is a T-Shirt Salesman, swiftly breaks into Failed Olympic Bid and progresses into the likes of Camp Cappuccino, Robocop 4 – F*** Off Robocop  and Sorry Dad, I Was Late for the Riots. Pastiche, parody or political satire, they’re all songs that match their titles – incisive indictments of society at large that lay waste to culture, be it popular or high, through frantic, jittering arrangements that somehow retain a sense of anthemic melody.

Even pseudo punk breakneck charges such as I Am the Least of Your Problems and Goals in Slow Motion are, bizarrely, ridiculously catchy. As such, The Plot… straddles two extremes – the fringe and the centre, combining them with an expert, excellent fury. The result is subversion of the most intelligent, insidious, inventive kind. 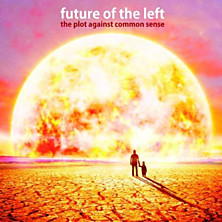