The Strange Boys Be Brave Review

They’ve got sensitivity in spades, though it’s hidden by scuzz and disharmony.

There is an underlying grapple amongst the music of dusty Texans The Strange Boys, one that alternates between candy-pop and impenetrably scratchy rock. In a way, they’re the perfect band for young rockers to hear and be influenced by. A rich musical history and schooling runs through them, from Love and The Velvet Underground through to more conventional beat-led standards of The Rolling Stones, but with a big enough twist of modernity to plant them firmly in 2010. All the ingredients are there – a potentially huge single in the title-track, Strokes-ian hype machine ready to hop into action and, crucially, some decent tunes to back it up with.

When singer Ryan Sambol’s vocals begin to pile into your consciousness, the first priority is not to hear what he’s singing, but to discover if this is what one might loosely term singing. Prolonged listening, though, reveals that he has innate melodic instincts, but he is determined to wrap them in barbed wire. As the songs progress, the challenge becomes working out exactly what conventional melody The Strange Boys had in mind before they happily pillaged it into an unrecognisable state.

The words themselves, then, are something to consider after you’ve digested the sonics. Broadly swaggering and occasionally hilarious, they suit the desert-dry recordings perfectly. On Laugh At Sex, Not Her, the humorous predicament of over-hearing some nocturnal flatmate’s shenanigans is buoyed quite sweetly by the distant, winding guitar line – we’re encouraged to laugh along at this sordid voyeurism and, to be honest, there’s nothing guilty about that particular pleasure. When introspection reigns on All You Can Inside, with its Leonard Cohen-esque lilt, the tendency is to study each and every crackle of Sambol’s voice, the governing quiet a wonderful accompaniment to his words.

2010, then, seems to be somewhere we can place a little bit of faith that rock‘n’roll will continue happily along its merry path to the mainstream. Be Brave is not quite the barnstormer that its lead single suggests, but there is enough gumption to see The Strange Boys through any scrutiny of their credentials. What’s more, folk will discover that they’ve got sensitivity in spades, as much as they might try to hide it with scuzz and disharmony. 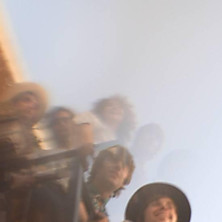