…“by the lake, a young girl waits, unseeing she believes herself unseen, she smiles faintly at the distant tolling bell, and the still falling rain’. So runs the slightly bizarrely written poem on the sleeve of Black Sabbath’s debut. This, together with the mysterious, evocative sleeve (neither of which had anything to do with the band and whose origins are shrouded in mystery), sets the stage for one of the most striking opening statements in the history of rock music.

“Black Sabbath” is still powerful now; as iconic as the opening of ‘'Anarchy in the UK'’, ‘'Whole Lotta Love'’ or even ‘'A Love Supreme'’. God knows what it must have sounded like to a generation of lank haired teenagers back in 1970. As the band bite down on Tony Iommi’s monstrous riff it’s immediately clear that Sabbath were taking heavy rock in a direction that owed little to its blues roots (in fact, the riff was based around the interval of a tritone, known commonly as the ‘diabolus in musica’ due to its supposedly devilish qualities). This wasn’t good time music.

Though the song’s lyrics were inspired by a personal supernatural experience, they’re more Hammer film camp than H.P. Lovecraft. Lyrical finesse was never the band’s strong point – as Sabbath authority Paul Wilkinson points out, there are only five words on the entire album that are longer than two syllables. But Ozzy Osbourne invests them with more emotion than any otther vocal performance he managed later. His cry of 'Oh no, please God help me!' before Iommi, Butler and Ward launch into their final galloping assault on the senses is genuinely scary.

Elsewhere the lack of suitable material and the rushed production job don’t help, though “Behind The Wall of Sleep” and the “N.I.B.” (in which Lucifer falls in love and becomes a nice bloke) show off Iommi’s evolving compositional skills to full effect. Black Sabbath was recorded in two days and cost £600 to make, which isn’t a bad investment for an album that changed the face of rock music. That’s not an exaggeration by the way... 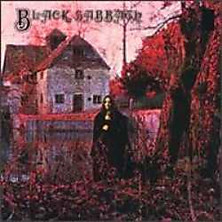