When Erykah Badu’s debut album, Baduizm, was released in 1997, with her headdress, Billie Holiday vocal inflections and her smart, spot-on reinterpretation of R&B, she became the high-profile female figurehead for neo-soul. When Mama’s Gun arrived three years later, it carried huge levels of expectation.

Follow-up albums are forever fascinating. Often, you are damned if you do and damned if you don’t. If Badu had given the world another Baduizm, everyone would have accused her of simply standing still. Instead, she flew freely and deeply into alternative arenas and released a meandering, occasionally impenetrable masterpiece.

Produced by the Soulquarians collective, led by drummer Ahmir "Questlove" Thompson, rappers Common, Bilal et al, Mama’s Gun is both a step away and continuation of the hippy Afrocentricity of Baduizm. At times, it resembles an out-of-focus Sly Stone jam; at others the best songs Joni Mitchell never recorded.

Penitentiary Philosophy gained a lot of attention. It is hard, rocking, with a Blaxploitation feel, and acts as a marvellous palate cleanser, showing that a lot had happened since her debut.

However, …& On, which contains lyrics stating that Badu is an “analogue girl in a digital world / the rasta-style flower child”, is the continuation of her first album stand-out On & On. It underlines that this is the same artist moving forward, especially as it segues into the jazz influenced Cleva, a paean to internal rather than external beauty.

Booty – aside from being a showcase for Thompson’s incredible drumming – borrows the phrasing from Diana Ross’ Love Hangover and shows Badu as a smart, assertive woman.

It’s the last song, Green Eyes, which stuns: a three-part, 10-minute rumination on a break-up, with plenty of self-doubt and self-esteem issues thrown in, possibly inspired by her split with the father of her child, André 3000. It is touching and heartfelt.

With its sometimes fiery but often beautiful vibe, Mama’s Gun is a remarkably assured work that has aged well. Bag Lady was its hit and the album went platinum, but it didn’t have the lasting impact of Baduizm. But for those who found Baduizm a little too sweet, this is a fabulous, ever-evolving work by one of the most dazzling artists of the past two decades. 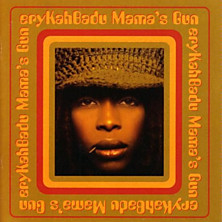