Tilston eloquently explores the relationship between technology and the human condition.

As the title hints, Sussex singer Martha Tilston’s latest album is concerned with the complicated relationship between technology and the human condition. This theme is an easy one for folk musicians to bring up, but generally a hard one for them to tackle effectively.

Too often, folk songs with this theme settle for one of three acoustic stereotypes: happy Luddite ode, nostalgic ramble or sledgehammer protest. It is therefore to Tilston’s great credit that her album, while saturated with sadness and despair, adopts none of these positions. Instead, she explores these issues with eloquence and balance.

For Tilston, the personal is political. For example, in Silent Women, she links disquiet at modern warfare with the oppression of women’s intellectual voices, and then reflects on her own upbringing. While some might find this approach self-centred, it does give her concept a pure emotional heart, and means that her political points are never empty sloganeering.

There is someone else who is very good at doing this kind of thing: Joni Mitchell. And, boy, does Martha Tilston like Joni Mitchell. It’s hinted at from the beginning, but it is impossible to ignore on Blue Eyes and Staircase. On these two tracks in particular, Tilston imitates Mitchell’s distinctive phrasing to such an outrageous degree that homage becomes cheap impression.

Perhaps in an effort to make these songs seem less like outright theft, the penultimate track on the album, Butterflies, confesses the influence, as Tilston namechecks song titles and lyrics from Joni’s most iconic albums. Therefore, some may reasonably ask: why listen to Machines of Love and Grace when one can listen to Blue or Clouds?

The answer to that is in tracks such as the unusual Survival Guide, a sparse, rhythmic piece that somehow finds a middle ground between Mary Hampton and Adam Ant. When Tilston forges with her own musical iron – as she also does on the delicate More, and on the murky tangle that is Let Them Glow – the results are powerful.

Tilston shouldn’t settle for being an ersatz Joni, because the more she does so, the more she cheats the world out of her own unique voice. 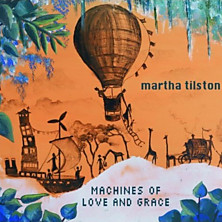