If you want an explanation for the unlikely rise of Lana Del Rey, it isn’t that hard to find. Ignore accusations of cynical marketing and inauthenticity, or speculation about surgery and Daddy’s money – that’s not important. And don’t get distracted by the YouTube statistics or the online hyperbole, this isn’t about new media. It’s about something older and more mysterious than that; the extraordinary, resilient power of the pop song. For all of her trashy Americana and startling beauty, if Del Rey hadn’t arrived last summer with a song as luminously beautiful as Video Games, none of this would be happening.

So the only truly important question about Born to Die is whether there’s more where that came from. Cynics look away: the answer is an emphatic yes. Nothing else quite matches Video Games’ eerie perfection of form and melody – after all, 99% of singers go an entire career without finding one song that good – but several run it perilously close, while revealing there’s more to her than the love-stunned torch singer of Video Games.

What makes Born to Die so richly fascinating – and what marks Del Rey out from the standard issue "I’m hot, you’re hot" pop starlet – is her preoccupation with Hollywood archetypes of American femininity, and her ability to shape-shift between them. So, on the stately, bloodstained title-track, Del Rey plays femme fatale, deliciously stoned and doomed, with an imperious vocal to match. On the addictive, sugar-rushing Off to the Races she’s trailer trash living the high life, her vocal veering deftly between husky cynicism and hiccupping glee; while on the tender This Is What Makes Us Girls she’s the poor little rich girl looking melancholically back on youthful hedonism.

It all reaches its apotheosis on National Anthem where Del Rey, dissatisfied with merely being an all-American girl, becomes America itself, offering up deadpan slogans like "money is the reason we exist" before demanding utter patriotic devotion on the swaggering chorus. If that sounds knowing that’s because it is, not to mention intelligent, ambitious, and more interesting than anything Adele is likely to write even by the time her inevitable 72 collection hits the shelves of the future. It’s also brilliantly realised, thanks to Del Rey’s extraordinary delivery, her ability to slip from deep-toned haughtiness to breathless ecstasy to velvety vamping – often in the same gorgeous melody.

Born to Die isn’t perfect: it slumps slightly towards the end, and the glossy trip-hop production grows wearying on lesser gothic melodramas like Dark Paradise. But it’s the most distinctive and assured debut since Glasvegas’ eponymous disc in 2008, and makes you desperate to see where she goes from here. Del Rey’s defenders can take a break: Born to Die does their job better than they could hope to. 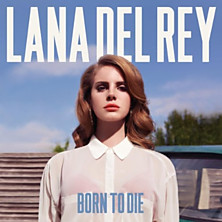