Pat Metheny What’s It All About Review

His fans are 100% guaranteed to love every moment.

Guitarist Pat Metheny is probably about as successful as a jazz musician gets to be these days. The winner of multiple Grammy Awards, with scores of recordings under his belt, he’s amassed a huge following for his brand of highly-polished, richly melodic fusion-lite. Ever easy on the ear, his is a kind of adult-oriented jazz, engineered to go down smooth.

This album is unlikely to ruffle any feathers – it’s as daintily crafted as anything he’s ever released – but, rather than the air-brushed electric jazz he’s famous for making with his eponymous group, What’s It All About is a solo acoustic guitar record. This thematic follow-up to the Grammy-winning 2003 solo release One Quiet Night contains 10 tracks drawn from pop and jazz, some very well known, and all chosen for their inherent melodic and harmonic properties. As Metheney puts it, "Every one of these tunes has something going on that is just hip on a musical level, no matter how you cut it."

The majority of the tracks are performed on a specially tuned baritone guitar, which provides a sumptuous setting – as on the diaphanous and delicately deconstructed take on Girl From Ipanema. Indeed, the heart of this album is a string of intimate, unhurried tracks (recorded late at night in Metheny’s New York apartment) – ranging from Bacharach and David’s Alfie to The Stylistics’ Betcha By Golly, Wow – which Metheny gently nudges into subtly melodic extemporisations via small detours from the tune. Throughout, he seems supremely comfortable with the songs, trusting in their logic and form, allowing them to suggest their own stories.

There are, however, a few tracks that depart from this template. Paul Simon’s The Sound of Silence is interpreted using a 42-string guitar (essentially a portable harp), dripping with dreamy cascades and flourishes. And surf classic Pipeline gets a grittier treatment on the six-string guitar, goaded along with urgent strumming and a Morricone-style Iberian lilt.

But these flashes of stylistic innovation are rare. For the most part, it’s all supremely controlled, sweetly inoffensive and velvety smooth. Metheny’s many fans are 100% guaranteed to love every moment. 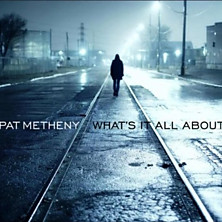