A daring and brilliant covers collection that provides Roy with deserved exposure.

Unusual cover versions have long been a reggae staple. But it’s hard not to be surprised by the effectiveness of this Nirvana tribute from producers Prince Fatty, Mutant Hi-Fi and veteran singer Little Roy (despite the sum of its parts).

Little Roy, born Earl Lowe in Kingston, was the first artist to top the Jamaican chart with an overtly Rasta tune – Bongo Nyah – in 1969. His songs have been versioned repeatedly through the dancehall era – his Tribal War was even used on Nas and Damian Marley’s Distant Relatives album – but he has yet to crash the mainstream himself.

Roy appeared on both Fatty’s albums and, with hindsight, it’s easy to see why Mr Pelanconi chose him for this project. In addition to his obvious talents his voice has a similar grain to that of Kurt Cobain.

Where this set’s likely inspiration, Easy Star All-Stars’ Dub Side of the Moon, mined the safe student bedroom crossover between Floyd and dub, Battle for Seattle is far more of a gamble. Daring and brilliant, it showcases the visionary side of Prince Fatty's retro stylings while bringing Little Roy the exposure he deserves. 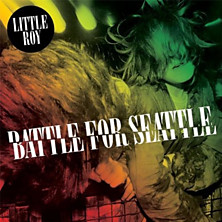