The Dukes of Stratosphear 25 O'Clock Review

Time flies when you're having fun and in 1985 XTC were having plenty of it.

Time flies when your having fun and in 1985 XTC were having plenty of it - recording this mini-album homage to pyschedelia in just two weeks flat.

Legend has it - and this being XTC there are plenty of legendary tales to take your pick from - that the origins behind the sessions came about when Andy Partridge's production job with Mary Margaret O'Hara fell through.

The resulting vacant fortnight gave the ever-hyperactive Partridge the opportunity to tick off a long held ambition to recreate the 1960s that he'd seen and heard in his head and get it all down on tape.

Adopting the collective personna of The Dukes of Stratosphear (a name that he'd considered for the band before finally settling for XTC) the band time-warped themselves across a series of brilliantly witty psych pastiches.

You'd need to trainspotter's notebook to chronicle all the musical references anthologised within, but a kaleidoscope of cameos would include The Beatles (What In The World and the exquisite Mole In The Ministry), The Electric Prunes (25 O'Clock), The Yardbirds (My Love Explodes), Pink Floyd and The Move (Bike Ride To The Moon).

Sometimes these kind of in-jokes are better on paper than they are in reality. Not in this case though. 25 O'Clock bristles with enthusiasm and energy, positively exuding good, and let's be honest here, wacky vibes.

Released on April Fool's Day 1985 under the Dukes' pseudonym, it actually outsold their last album proper, The Big Express. Indeed, its influence can clearly be heard on straighter albums such as Tears For Fears' 1989 work, The Seeds Of Love.

The band enjoyed their break from the day job of being XTC so much that they repeated the exercise successfully with Psonic Psunspot in 1987, which has also been just been reissued alongside this one, complete with a clutch of demo tracks which are just as entertaining as the final versions.

If, as they say, there's a thin line between being a genius and being mad. Andy Partridge, Colin Moulding and Dave Gregory are clearly experts at walking that particular tightrope. 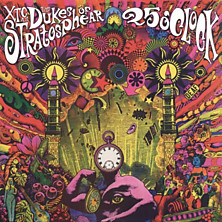