Iron Maiden No Prayer For The Dying Review

Sought to expand an already extensive following by toning up a bit of instrumental flab.

Coinciding with the departure of long-term guitarist Adrian Smith and the recruitment of his replacement Janick Gers, (who had played on Bruce Dickinson’s solo work, as well as stints with Gillan and Fish), No Prayer For The Dying sought to expand an already extensive following by toning up a bit of instrumental flab via shorter tunes suited-up in some radio-friendly threads. The chief culprit is the title track which mixes ''Kayleigh'' with Van Halen’s spandex lope.

And where do you go when you’ve got to the top? Why, over the top of course, and they do just that big time with “Bring Your Daughter…To The Slaughter.” A soundtrack tie-in to the devalued Nightmare On Elm Street franchise, this is a dumbed-down romp that’s as camp as a row of tents. Remarkably enough, it got to number one when released as a single helped along no doubt by a credibility-restoring BBC ban.

Elsewhere it’s business as usual, with episodic prog -rock tones creeping through in the opening passages of “Fates Warning”, “The Assassin”, and the epic album closer, “Mother Russia.”

Having a pop at the religious right is meat and grist to rock bands of all shades and sizes but on “Holy Smoke” Bruce Dickinson has Jesus himself pointing the finger the hustlers and hypocrites. If it sounds a bit trite then the actual execution is better than you might think.

Similarly, “Tailgunner” pondering on the rights and wrongs of war that cheekily takes Biggles and Doctor Strangelove along for the ride, works unexpectedly well. A tight formation of terse basslines, sprightly solos, hooks, and last-minute precision twists that veer clear away off to the left field just when you think it’s about to collide head-on with a HM cliché.

They’re able to do this for the most part thanks to bassist Steve Harris’s writing, and though overall No Prayer For Dying lacks the consistency of some of their earlier albums, there’s more than a few worthwhile detours. 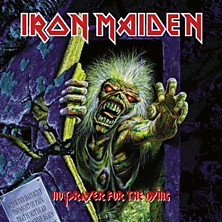