Smooth soul from across the English Channel.

It’s probably fair to say that one doesn’t frequently look to France in search of soul superstars in the making. But Ben l’Oncle Soul – born in the central France town of Tours in 1984 – is steadily making a name for himself outside of a domestic market that he’s already enjoyed much success in. Real name Benjamin Duterde, the rising singer’s musical moniker translates as "Ben the soul uncle". Whether he’s got nieces and nephews to call his own isn’t important – what is: that he delivers on the genre element of his stage name. Sweet and smooth, his vocals are immediately impressive, his flitting from English to French lyrics as accomplished as could be hoped for.

Naturally, he’s more at home singing in his native tongue, as tracks like Mon Amour and Demain J’Arrete illustrate regardless of the listener’s ability to comprehend what’s actually being said. But this set’s opening cover, of The White Stripes’ Seven Nation Army, makes it abundantly clear that he can adapt to the language that’ll ultimately bring him greater overseas sales. As covers go it’s in the Mark Ronson mode of lightly layering horns and such over an existing framework; and with the song being such a simple piece in the first place, Duterde can’t help but fill spaces in the arrangement with rich parps and gentle percussive motifs courtesy of a tight backing ensemble. The following Soulman is the artist’s calling card cut, which addresses his retro leanings in an endearing manner: by confessing he’s not quite up to his own soul heroes (and further famous faces from popular cultural history), he elevates his own standing beyond that of a standard wannabe, with such a humble approach refreshing indeed.

Already a chart-topper back home, this collection comes with the seal of approval from the Motown France label – surely, for any soul artist today, that’s the sort of brand association that dreams are made of. If there’s a (slight) downside to these 14 tracks, it’s that atmospherically it’s focused firmly on the upbeat and optimistic – a little darkness might have added some welcome contrast to proceedings, placing Duterde on a plane of promise comparable to that navigated by the late Amy Winehouse. As it is, L’Oncle Soul is a fine complementary set from the continent which’ll rub its spine neatly against that of Mayer Hawthorne’s latest LP, How Do You Do. Both artists offer appealing spins on old sounds, and the competence of their studied craft can’t be faulted. A few more fireworks would benefit both catalogues, mind. 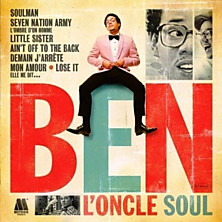