This compilation demonstrates that highlife still beats hiplife, hands down!

Ten years ago, I visited Ghana to find out what had happened to highlife, the style once synonymous with this part of West Africa. In the mid-20th century, highlife was an international phenomenon, but was in serious decline by the early 1980s. By the late 1990s, a cheaply produced and often derivative hybrid of hip hop and highlife was emerging from a music industry brought to its knees by economic decline. This compilation profiles the 'hiplife' artists that have dominated Ghana's airwaves since – and in some cases MTV Base, Africa's answer to MTV.

On this evidence, most of Ghana's 'Black Stars' aren’t about to cross over any time soon. Sound quality won't be such an issue with the iPod generation, or kids whose mobile phones blare out like tinny transistor radios on a bus near you. But why should they choose these guys over the 'real thing’' – those American/Jamaican hip hop, R&B, ragga, and reggae artists who they are so much in thrall to?

My Body by Tony Harmony features vocal trio Triple M, the compilation's only female artists, but the vocal and lyrical mannerisms of both are so typical of Jamaican ragga that you probably wouldn't guess it was Ghanaian outside this context. The Jamaican influence is also all over Sheriff Ghale's Illusions (more a conscious reggae vibe) and 'raglife' artist Terry Bonchaka's Lomna Va. Yes, most art is imitative, but it would be nice to hear more of where people come from as opposed to where they're coming from.

However, there are signs of more confidence in local roots. King Ayisoba's Modern Ghanaians is built around a groove on the kolgo, a two-stringed instrument from Northern Ghana. And the guitars on both Batman Samini's Do Something and V.I.P.'s Ahomka Wo Mu do convey a strong highlife flavour, as does the use of local languages such as Ga and Twi in many places, and the occasional distinctively Ghanaian vocal harmonies. It's easy to hear why Tic Tac's Kangaroo was a hit, and Pidgen Allstars' electro-flavoured Toto Mechanic is so crude you just have to laugh out loud. 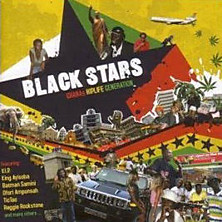