Definitely not for jazzers who dig swallowing heavy roughage.

The remarkably youthful Portico Quartet's debut disc is one of the 2008 Mercury Prize nominations, but we all know that the token folk, classical or jazz contenders have almost zero chance of winning, when set against the rock and pop mainliners. It doesn't help when this London combo's album is somewhat coffee-tabled in character (or maybe it does).

The Portico twin-hang instrumentation marks them out immediately with a unique jazz palette. What does this mean? A hang is a little-known descendant of the steel drum, smaller, and with the look of a flying saucer. Straight away, this gives their sound a Caribbean resonance, but it also imparts a sense of opalescent New York minimalism, coupled with a faint aura of Indonesian gamelan. All this and a drums, bass saxophone line-up too. This whole original concept grew out of drummer Duncan Bellamy purchasing a hang at a festival, then presumably recommending that Nick Mulvey buy another, thus creating a double hang situation.

All of the pieces are their own works, and the Porticos make a key feature of precisely twining melodies, with Jack Wyllie's predilection for the soprano horn imparting a bittersweet tone, set against the rippling warmth of the hangs. On Zavodovski's Island, there's an attempt at striking up a groove, in a slightly prissy manner, appealingly lightweight, but a touch too gentle. Then, the title piece is a waltzing, swaying caress of a tune. The reggae tip-toe of Too Many Cooks suggests a ballet collaboration might be forthcoming, and Monsoon also goes for the stippled skank, before quieting down again. A snatch of squall colours Wyllie's soprano fleetingly, and then it's back to the ineffectual prettiness. There's nothing actually 'wrong' with this music, but it's definitely not for jazzers who dig swallowing heavy roughage. 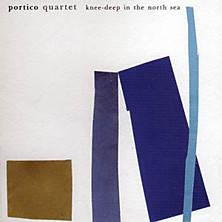