You can't imitate the innovators.

It may be thirty years since NEU! became the godfathers of Krautrock, but their influence is still going strong – at least that's what a new compilation hopes to prove. A plethora of stars have stepped up to the plate for a disc not of covers, but of songs influenced by the German legends – and that distinction is precisely what saves BRAND NEU! from being just another generic celebration.

These days every granny and her goldfish are dabbling in electro, but it wasn't so back in the 70s, when Michael Rother and Klaus Dinger split from Kraftwerk and started making some of the most exciting stuff to come out of Germany, well… ever. In doing so, they influenced Bowie, Radiohead and a lot of people in between.

So it's not surprising a star-studded multi-national array of artists have queued up to contribute to this disc. Old boys Oasis, Primal Scream, LCD Soundsystem and Kasabian sit well alongside newbies Foals, Fujiya & Miyagi and School Of Seven Bells. Tracks from Dinger and Rother themselves top it off – with everyone bringing their own vibe to the party.

Top marks go to Kasabian, Foals, Hook & The Twin and one of the less famous (and thus more humble) contributors, School Of Seven Bells. Benjamin Curtis from SOSB describes everyone in music as 'living in the individual shadows' of NEU! Maybe that's the reason why their track – the only, err…, brand new one on the album – shines so brightly above the rest.

But the prize for dubious shoehorning goes to Ciccone Youth's 1988 track Two Cool Rock Chicks Listening To NEU!, a rambling mess which seems to have got in the back door on the strength of a name check. Why that's been chosen to start this album is anyone's guess – it's instantly switch-off-able.

This is the first release from Feraltone Records – a new imprint from Grönland (home of NEU! as well as Fujiya & Miyagi). Crammed with rare tracks, unreleased material and even the now late Dinger’s last ever recording, this is a gem for fans and a great introduction for newcomers. Does it cut the mustard alongside the original NEU! albums? Of course not – but then, you can't imitate the innovators. 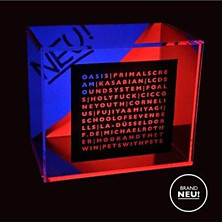