Patrick Watson Adventures in Your Own Backyard Review

Something of a star in his Canadian homeland after winning the 2007 Polaris Prize – the country’s equivalent of the Mercury Prize – for his second album, Close to Paradise, and nearly repeating the feat two years later with his third, Wooden Arms, Montreal-based Patrick Watson makes a bid for similar acclaim in the UK with the release of his first for Domino Records.

Any failure to scale those heights will be our loss rather than his: Adventures in Your Own Backyard is a frankly exquisite, elegantly crafted gem. Slightly sparser than Wooden Arms, this fourth album overflows with sentiment without ever being sentimental, Watson’s delicate falsetto a distant, less flamboyant cousin of Jeff Buckley’s, his band’s arrangements ingenious but never overwrought.

His graceful touch is evident from the album’s opening seconds, where he strokes out the simplest of melodies from his piano before barely whispering the opening lines: "Leave a light on in the wild / ‘Cos I’m coming in a little blind." It’s as still as a misty lake at dawn, and equally as beautiful; but Watson is a man of many sides, and after three minutes so impalpable as to be hardly there, Lighthouse suddenly bursts into a mariachi-flavoured celebration, slow enough to be funereal and yet full of joy.

It’s this kind of bittersweet melancholy that he pursues masterfully throughout this set’s dozen songs, whether on Blackwind – distinguished by the lightest of strings and hints of pedal steel – or Quiet Crowd, a piano ballad that blossoms unexpectedly into the sweetest, if briefest, of sing-alongs, its flutes trilling playfully while chamber-pop violins swoon in the background.

Opening single, Into Giants, is more obviously upbeat, a shuffling slice of homey folk that fades out midway, only to emerge on the back of a triumphant trumpet fanfare, while Morning Sheets is a more dramatic, orchestral track that might even pass for an updated take on the ambitious pop Radiohead undertook on The Bends.

But it’s the subtlety of Watson’s approach – whether he’s serenading us with the sweet comfort of Words in the Fire or offering a Broadway pastiche in a style familiar to fans of Rufus Wainwright – that makes this such a special record. Others this year will be brasher, more immediate, and maybe more innovative, but few will be lovelier, more rewarding or, indeed, better. 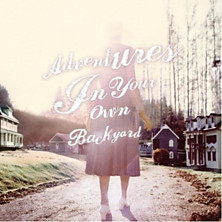