The album that granted Isaac Hayes his venerated status.

There are few films that are defined almost entirely by their soundtrack. Shaft, the 1971 Gordon Parks-directed detective drama, is one of them. Its name will always be inextricably linked to Isaac Hayes, who put together its jazzy, funky score. More than that, its reputation is down to one tune alone, the film’s opening theme.

Theme From Shaft is one of those indestructible songs that age cannot wither. It brought together the best of John Barry’s James Bond soundtracks with something a little greasy from the American south. It is gorgeous, orchestrated soul, slow to reveal its charms with the nagging groove of Willie Hall’s hi-hat and the much loved wah-wah guitar of Charles Pitts. It is still a surprise when Hayes’ vocal comes in after two-and-a-half minutes. The call-and-response between Hayes and the backing vocalists, led by Telma Hopkins, tells of the film’s hero, John Shaft. He is the “black private dick, who’s a sex machine to all the chicks”, which amplified machismo and reinforced stereotypes in the same breath. And just as you are really getting used to it, the song has gone, vanished after just four-and-a-half minutes.

The rest of Shaft is what it is: instrumental soundtrack music. You get a little of Hayes’s keening Hammond on Bumpy’s Lament; the guitar lick in Walk From Regio’s has been sampled myriad times, most notably by the Beastie Boys on The Sounds of Science. Of the two other vocal tracks, Soulsville is a bittersweet catalogue of ghetto life, featuring Hayes at his most doleful. The 19 minutes of Do Your Thing dissolve into something like an alt-rock jam, with The Bar-Kays, Hayes’s backing band, wigging out. There is no other expression for it.

The album became a US number one and won Hayes an Oscar, a Grammy and a Golden Globe. It guaranteed him the venerated status he enjoyed all the way to his death in 2008. The only small disappointment on this expanded edition is that, for all its liner notes and remastered sound, it has but one bonus track, a new mix of the evergreen Theme. 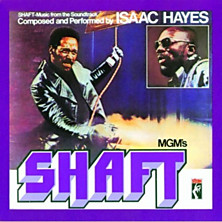