If this is the renaissance – Q-Tip has found himself.

It's hard to imagine what people made of Q-Tip when he first broke through. What late 80's America thought about a rapper named after a cotton bud is anyone's guess. Because nowadays, with the legacy of A Tribe Called Quest following him, Q-Tip commands legendary status.

The Renaissance suggests Q-Tip feels he still has something to prove, which is understandable for a solo album which is only his fourth in nine years – with two of those, Open and critical hit Kamaal The Abstract, never released by his label.

This album – the first for new label Universal Motown – is an easy listen, with a vibe of being refreshed and newly in control. There are samples, Motown vibes (Won’t Trade and Move) and some big guest stars – like D'Angelo, Norah Jones and Raphael Saddiq on the stunning We Fight / We Love.

"I'm not a deity I'm far from perfect, me", he commands on opener Johnny Is Dead – perhaps a reference to this shedding of skin, as he was Jonathan before he converted to Islam in the mid 90s and became Kamaal. Whatever the meaning, the track sets a blistering standard.

He doesn't even need backing for a shining sixty seconds on Dance On Glass. And there are signs of other artists' influences here too – Eminem on Move and Outkast's lazy sexuality on You.

Q-Tip is in fine form when spitting solo raps, but also shines on the album's collaborations. Amanda Diva's effortless vocals on Manwomanboogie are pure funk when combined with Q-Tip's rapped verses. D'Angelo track Believe channels old school Prince. And if you can count him as a contributor, excerpts of a Barack Obama campaign speech are reportedly used on Shaka – though you'd struggle to distinguish them.

This is not commercially poppy like Breathe and Stop – though brilliant Norah Jones collaboration Life Is Better leans towards it. But Q-Tip's infectious enthusiasm for being where he wants to be, doing what he wants to do, shines through. Even bonus track Feva feels like an album highlight, rather than a last minute slapdash addition. If this is the renaissance, then forget the early years – Q-Tip has found himself. 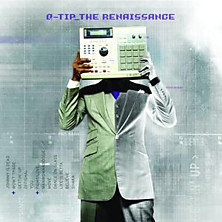