A superb comeback, 16 years after their last studio LP, from the big-riffed Seattle band.

Of all the bands emerging in a blur of rain, greasy hair and plaid from the Pacific Northwest during the early- to mid-90s, Soundgarden have arguably been the most poorly served by posterity.

Kurt Cobain sealed Nirvana’s legend with a shotgun blast, while the likes of Mudhoney kept their underground credibility intact by lying relatively low. Soundgarden, though, never seemed to achieve the critical acclaim or cultural cachet of their peers.

But from the off, King Animal sounds as if it’s written by a band with a point to prove: “I’ve been away for too long / Though I never really wanted to stay.” This pertinent line from Been Away Too Long might speak volumes about Chris Cornell’s attitude to their return, and their initial demise; and, perhaps, the less-than-favourable reaction to Audioslave or his own solo material.

Musically, Been Away Too Long is a step up to the plate, too – there’s a rhythmic kinship with 1994 album Superunknown’s My Wave, but there’s a lot more going on. Cornell’s ever-distinctive voice is more streamlined, and there’s some high-end guitar fiddling over the booming toms before a discordant, clanging breakdown. It makes for an exciting taste of what is to come.

Soundgarden have always possessed a real ability to combine darkness with immense grooves, as heard clearly on the sinuous Taree; and it’s this that lifted them above their more thrashy, punk rock bar band peers. The 13 sturdy tracks of King Animal carry this compositional attitude into the 21st century.

King Animal undeniably draws its strength from the band’s accessible Superunknown era, but also takes Soundgarden somewhere fresh. A Thousand Days Before is rolling and melodic, and Blood on the Valley Floor almost sensual.

The overall theme is that of dark Americana, with Poe-recalling imagery and a sense of the political in lyrics about “bullets and missiles” in the grinding Non-State Actor or the negative pop chorus of Bones of Birds: “Too weak to survive.”

Soundgarden occupy a curious place in 2012, adrift of the EDM-meets-nu-metal rock mainstream. Perhaps that’s how it should be, though: they’re a stadium band yet still outsiders, singing in and of the rain. 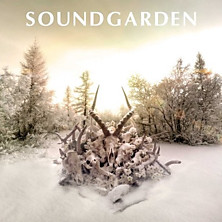