Provides a real sense of the ferocious intensity that makes this artist tick.

For long-term fans, this handsomely comprehensive box set boasting 58 (out of 61) songs presented on CD for the very first time, as well as a DVD’s worth of TV performances, represents an essential purchase. As such, it admirably doubles as a remarkably thorough and revealing primer for those encountering the savage pleasures of Thompson’s work for the first time.

With spiky renditions that occasionally outrank their studio counterparts, the tracks featuring his then-wife Linda’s supple vocals from the early-70s sessions remain some of the most spellbinding items in a notable songbook that has spanned over 40 years.

Though his instrumental prowess is expressive and nuanced throughout, his vocal style is often hard and unforgiving. During the 1985 Late Night in Concert set on the DVD, amidst the bustle of a surging band, his voice transforms into a hectoring bellow not always suited to serving his eloquent wordplay.

Perhaps that’s an inevitable by-product of the judgmental nature of his observations and the acerbic targeting of his subjects. Inhabiting a narrative the way an actor plays a part, the characters pronouncing and pontificating during several of Thompson’s songs are exactly the kind of people you’d cross over the road to avoid if you saw them heading your way.

Whether it’s the dead-eyed pessimism of End of the Rainbow, the cat-calling misogyny of Modern Women, or the sneering middle-age contempt of Kidzz (previously unreleased), the spittle-flying force with which Thompson hurls his invective makes for an emotionally taut, and occasionally tortuous, experience.

Though it’s not always pretty, when he stares into the abyss and reports back on relationships predicated on varying degrees of self-interest, exploitation and weakness, it’s an oddly thrilling and vicarious experience that keeps listeners coming back for more.

Some of the very best points come when it’s just the voice and guitar, stripped back and momentarily vulnerable. The lonesome, confessional ache of Ghosts in the Wind, from a truly commanding 1985 session for Andy Kershaw, is simply priceless.

Coming as it does with a lavish, informative booklet containing the guitarist’s reflections on these sessions (plus a useful and welcome perspective from Linda), this box set brings you about as close as can be to getting a real sense of the ferocious intensity that makes this artist tick. 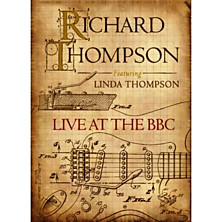